The New Yorker profiles Shigeru Miyamoto, the father of modern video games, whose spawn includes world-changing classics such as Mario and Legend of Zelda:

"One day, when Miyamoto was seven or eight, he came across a hole in the ground. He peered inside and saw nothing but darkness. He came back the next day with a lantern and shimmied through the hole and found himself in a small cavern. He could see that passageways led to other chambers. Over the summer, he kept returning to the cave to marvel at the dance of the shadows on the walls. 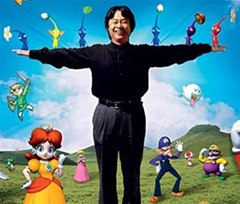 The cave has become a misty but indispensable part of his legend, to Miyamoto what the cherry tree was to George Washington, or what LSD is to Steve Jobs. It is also a prototype, an analogue, and an apology—an illuminating and propitious way to consider his games, or, for that matter, anyone else's. It flatters a vacant-eyed kid with a joystick (to say nothing of the grownups who have bought it for him or sold it to him) to think of himself, spiritually, as an intrepid spelunker.

The cave, certainly, is an occasion for easy irony: the man who has perhaps done more than any other person to entice generations of children to spend their playtime indoors, in front of a video screen, happened to develop his peculiar talent while playing outdoors, at whatever amusements or mischief he could muster. Of course, no one in the first wave of video-game designers could have learned the craft by playing video games, since video games didn't exist until people like Miyamoto invented them...

In his games, Miyamoto has always tried to re-create his childhood wonderment, if not always the actual experiences that gave rise to it, since the experiences themselves may be harder to come by in a paved and partitioned world..."