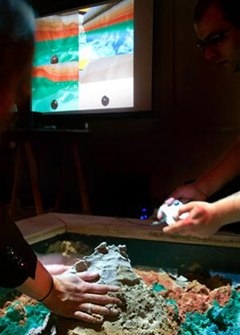 In the world of developers, a "sandbox game" is video game where players are free to "roam a virtual world and change any factor at will"; these types of games demand creativity on the player's part, with no linear/"correct" way to play.

Players are typically given infinite lives or continues; character development is often at a minimum so that the participant can project his/her own personality onto the character; players can even get lost within the game if the world is too "open".

Project Mimicry is a multiplayer sandbox game that takes the term "sandbox" literally. Developed by Dutch company Monobanda, the game combines physical, real world sand with a digital world projected on it.

It works something like this: A Microsoft Kinect camera observes the sandbox, generating new virtual levels as the players create them physically with the sand. Heap together a mountain of sand, and a projection of a mountain appears in the digitalscape; build it high enough, and snow appears on its peak. Want a lake? Just dig a hole. Up to four players control a ball that rolls, jumps and glides through the sandbox world; players can also build obstacles and racetracks for tiny virtual characters.

But above all: there are no rules, no points. Participants are expected to create their own games, just as they did as children playing in the neighborhood sandbox. Take a guided tour in the gallery below; click on the second video to see a test-run.

"With Project Mimicry we are researching the magic of play… Mimicry is another word for mirroring behavior and looks. When people imitate each other, playful situations automatically emerge. We have only scratched the surface of what is possible with Mimicry, and we are looking for companies who are interested in exploring those possibilities with us."

Interesting to consider where this concept could lead. What do you think? Weigh in below.

so cool... this is amazing. especially for level design. wowowowow.